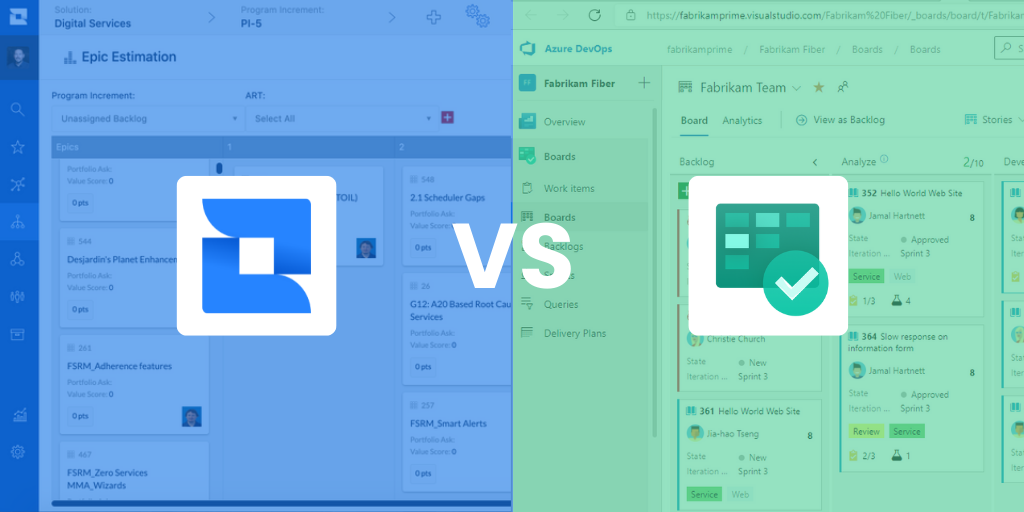 Since the inception of Agile methodologies over 20 years ago in the 2001 ‘Manifesto for Agile Software Development’, over half of all companies in the US have begun to adopt them in at least some capacity. They have proven to be remarkably effective to increase productivity, improve market reactivity and development flexibility.

A decade after that initial paper was published, the Scaled Agile Framework (SAFe), and other variations first showed how these ideas could expand to empower an entire organisation, rather than individual software teams.

Since 2011, SAFe and other similar frameworks, have exploded in popularity, enabling a range of organisations from small software houses up to titans of industry to reap the rewards of utilising Agile methodologies across their business.

Given these frameworks’ success, it was inevitable that some of the big software developing organisations would want not only to adopt them, but also to build tools that support the adoption and operation of Agile at Scale frameworks. That’s what we’ve seen with Atlassian’s Jira Align, and Microsoft’s Azure Boards, and some other competitors we won’t have time to delve into here.

Neither of these tools are particularly new. Jira Align originated as AgileCraft in 2013, and Azure Boards was launched as a brand in 2018 with the break-up and rebranding of Visual Studio Team Services (VSTS) into five ‘Azure’-branded tools, including Azure Boards, under the collective brand of Azure Devops. In other words, Azure Boards is part of Azure Devops.

Jira Align and Azure Boards are both very powerful and widely used within the technology industry, but their depth of functionality can make it challenging to determine which solution might be the best for your company’s specific use case. As specialists in Agile ways of working, and the Atlassian suite in particular, we hope we can help to dispel some of that uncertainty.

A peek into Jira Align

Jira Align is a dedicated, enterprise-level platform that sits within the Atlassian software ecosystem, purpose-built to implement and support the use of Scaled Agile across a corporation.

If you’re a developer or engineer, it’s highly unlikely you’ve not heard of or used Jira at least once throughout your career. If Jira is ‘Agile for the Team’, Jira Align is ‘Agile for the Enterprise’. It bridges the gap between business strategy and technical delivery and provides visibility at a level of depth and of height that is simply not possible just with Jira and its extended functionality, like Advanced Roadmaps, formerly Jira Portfolio, or many other alternatives available as apps in the Atlassian Marketplace for that matter.

Jira Align has an extensive library of features, so it won’t be possible to cover everything that Jira Align can do for your enterprise, but let’s take a general look over the software, what makes it great and some abilities that set it apart from its competitors.

Just like an onion, Jira Align can best be described in terms of its layers. There are 5 levels of Hierarchy (descending order): The enterprise, portfolio, solution (optional), program, and team. To learn more, read our page What is Jira Align? 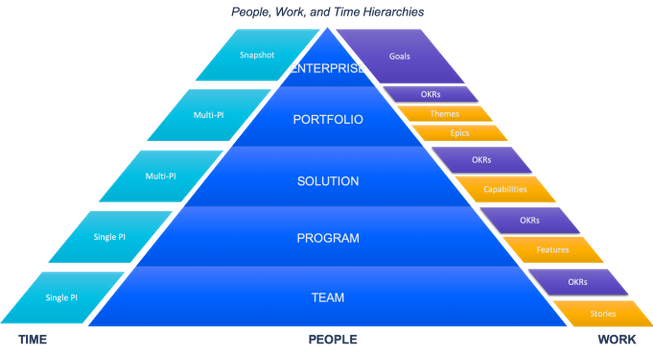 Each of these layers have their own respective work items, time increments, and types of employees that may operate within them.  As a basic example, please view our table below.

Jira Align can be used with various Agile frameworks, including Scrum@scale, Spotify and LeSS, but it is most often used with SAFe. The hierarchy layers utilise timeboxed periods called ‘program increments’, a concept from SAFe, which can be considered similar to a large software release, or the parent to an Agile ‘Sprint’. These Program Increments (PIs) often represent quarters of the year (10-12 weeks) and will have a number of sprints (4-5), objectives (Milestones, OKRs, SAFe), and deliverables within them. It’s often the case that teams working in different areas are dependent upon each other; PIs allow you to synchronise and roadmap your teams’ release schedules so that every team knows where they fit within the delivery of the overarching goals of the business.

Each level within Jira Align contains numerous dashboards, diagrams and functions that allow your business to track dependencies, risks and project delivery over time, and enable cross-functional collaboration. There is also considerable built-in functionality for financial management. Budget tracking, estimations and forecasting, funding plans and more can help your organisation create a cost-effective delivery solution that works not just for your customers, but stays within the financial means available.

It is important to recognise that Jira Align is not a substitute for Jira. It is intended to be used with Jira and cannot be used on its own. Where Jira organises and supports the work done within a team, Jira Align enables one team to work with another such that multiple teams can be co-ordinated with each other. It does this by drawing on data from one or more instances of Jira. In summary, Jira co-ordinates within teams; Jira Align co-ordinates between teams.

It should be highlighted that Jira Align has been developed to enable large enterprises to introduce and scale Agile practices across their teams in the most efficient way. Smaller businesses may find little use in Jira Align, since they can use other Atlassian offerings that provide sufficient functionality for project management, delivery tracking and road mapping, such as Jira Advanced Roadmaps (part of Jira Cloud Premium) for less cost and reduced operational overhead. Where Advanced Roadmaps scales to a few teams and 100-200 individuals using a single instance of Jira, Jira Align scales to hundreds of teams and thousands of individuals using multiple instances of Jira.

Find out more about Jira Align

Download our free Jira Align overview cheat-sheet to find out more about how Jira Align connects your business strategy to technical execution.

It’s ‘SAFe’ to say (terrible, we know) that Jira Align can massively expand upon the functionality of Atlassian’s other products into a business-wide strategic delivery platform, but nothing is perfect – it’s always worth checking if the grass of Jira Align really is greener than on the other side.

Microsoft is one of the biggest names in the technology space, and use of the Azure Cloud across the globe speaks for itself.

The tool most similar to Jira and Jira Align, and the one we’ll be diving into, is Azure Boards. At first glance, you wouldn’t be amiss to describe Azure Boards as ‘Jira, but by Microsoft’, but let’s discuss what makes Azure Boards different, and how it compares to Atlassian’s offerings.

Azure Boards contains features similar to both Jira and Jira Align; it’s more of an all-encapsulating product. We won’t delve into the details, but sprints, work items, and the overall team cycle of work function in similar ways to Jira. When we go up a level, to the epics/features/products, this is where we can compare distinctly to Jira Align.

In Azure Boards, ‘area paths’ allow you to outline the enterprise’s product/sub-product/team hierarchy – this is similar to the portfolio level of Jira Align. Teams can then be associated with one or more products on the area path. Area paths are thus groupings of work items by functionality, for example all tasks and teams relating to a particular module of software under development could be grouped into an area path. 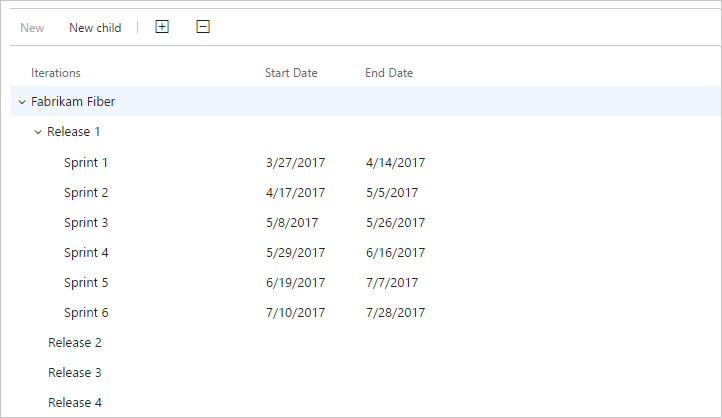 Azure Boards has sprint burndown charts, roadmaps, and customisable dashboards, similar to the reporting functions included with Jira. Azure Boards is somewhat less well provided with reporting capabilities on larger-scale metrics, whereas Jira Align expands on what is available in Jira and goes up to the executive level to provide much more abstracted reporting out of the box. 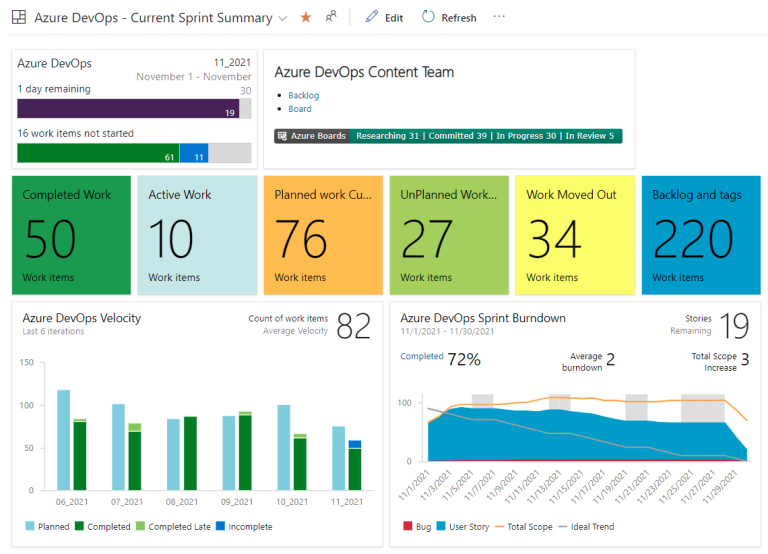 Managing projects from a financial aspect within Azure Boards can be harder to achieve efficiently too. Whilst tags and labels can be used to mark epics and other work items against specific value streams or budgets, it requires the creation of additional custom fields (estimated cost, current cost etc.) and custom dashboards to produce any meaningful reporting out of this functionality. Another area requiring more custom configuration is key event tracking. Microsoft suggests tracking milestones using custom fields, addition work items with specific dates, or 1-day tasks within the iteration path. Each of these options can produce the desired result, but they have not been designed solely for that purpose in the same way that the functionality within Jira Align has. Whilst Azure Boards lacks some of the deep functionality held within Jira Align, its ‘one price for everything’ model can make it very appealing and cost effective to deploy. With some workarounds, it contains all of the key features required for implementing Agile at Scale and has the other tools available to create an entire development ecosystem. This is possible with Atlassian, but the elements of the Atlassian suite are not quite as closely interconnected as those of Azure DevOps.

To summarise, please view our table below outlining how features translate across both Atlassian’s Jira Align and Microsoft’s Azure Boards.

Summary: What are the differences between Jira Align vs Azure Boards?

We’ve now seen how both Jira Align and Azure Boards can be used to implement Agile at Scale methodologies within your business. Let’s summarise our findings:

The verdict: Should you choose Jira Align or Azure Boards?

Every business is required to make strategic decisions that are individually optimal to their success; what may be the most appropriate solution for one may not be the same for all.

With that said, when it comes to the requirements of large organisations, Jira Align is difficult to overlook as one of the most powerful scaled Agile platforms available on the market. With many businesses using Jira and other Atlassian software already, it’s no wonder that Jira Align can be a natural progression as a company expands to hundreds or thousands of developers and other team members.

Whilst Azure Boards can be a great solution for implementing Agile and Agile at Scale – it lacks the depth and functionality specifically tailored to large organisations available in Jira Align. Like Jira, it can feel initially overwhelming with complexity. However, the sheer breadth of functionality makes it a relative powerhouse once proficiency with it has been built up within the organisation.

Considering implementing Agile at Scale, including SAFe, practices within your organisation?

As an Atlassian Enterprise Platinum Solution Partner, we provide a wide range of services from Atlassian software implementation, best practice advice and support, to bespoke training programmes tailored to your business.

Or, if you have any Agile at Scale questions, we'd be happy to help.

Just drop us a note below and one of our expert consultants will get back to you shortly. 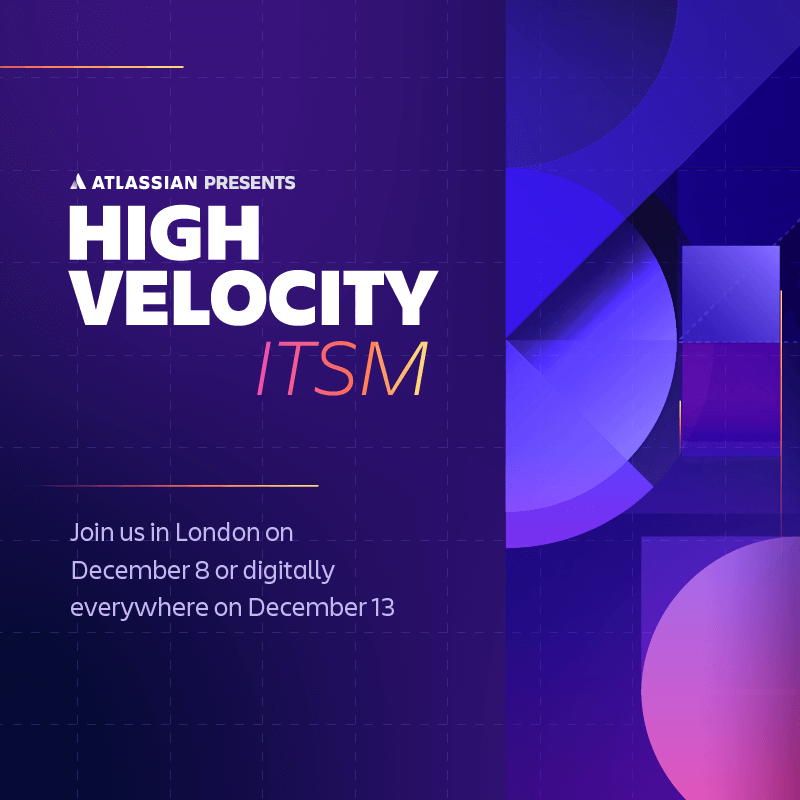 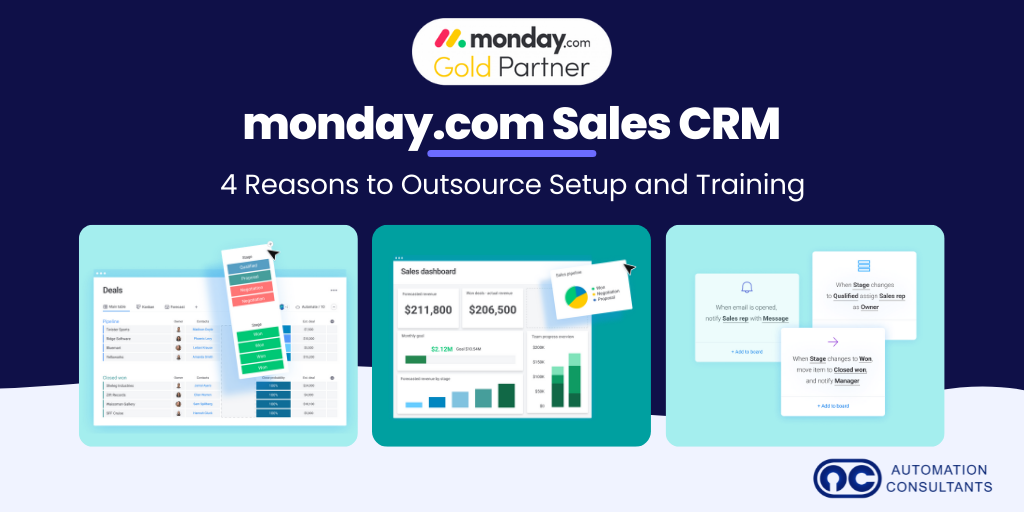